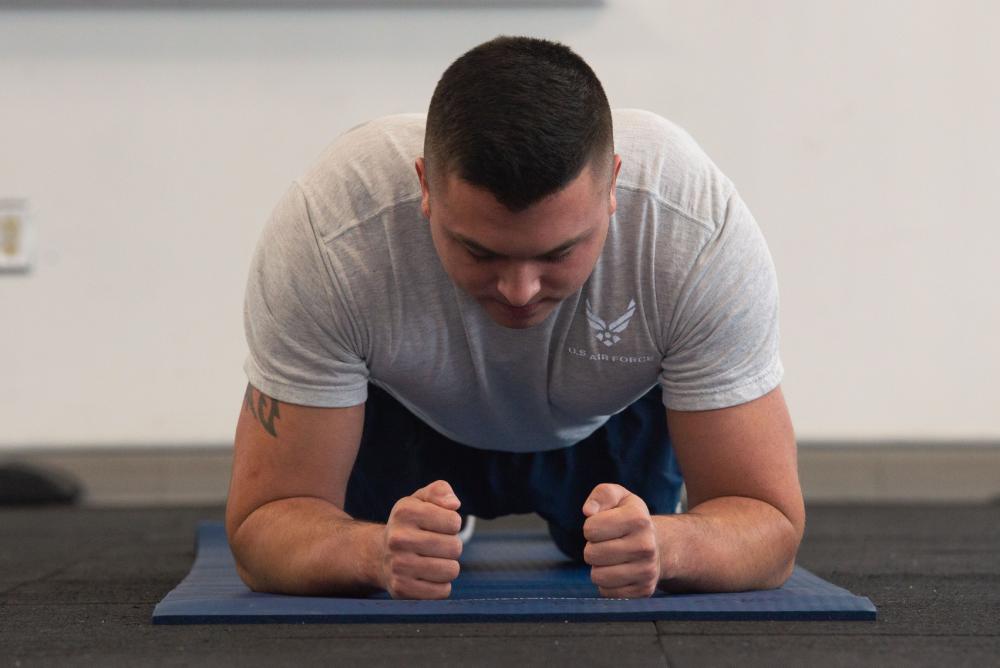 The Air Force recently unveiled new assessment options that allow Airmen to choose from a wider variety of exercises to show off their fitness level.

2nd Lt. Ryan Ducharme, officer in charge of the 157th Personnel Flight, said most of the new components were implemented at Pease on Jan. 1.

Cardio still only has one option, the 1.5 mile run, due to New England winter weather and space availability, but the High Aerobic Shuttle Run (HAMR) will be a option for cardio in the future.

Ducharme said the tests are now like an à la carte menu allowing Airmen to select an exercise in each component in which they excel the most.

“The cool thing about add-ons is that they just add more flexibility and move away from a single model,” he said. “All the traditional PT testing is still there if that’s what you prefer.”

“These new exercises test your strength in a different way,” he said after a few reverse crossover crunch circuits.

According to Staff Sgt. Robert Rojek, the 157th Air Refueling Wing Fitness Manager, scoring for the evaluation is the same as the traditional model with 20 points awarded for endurance, 20 for strength and 60 for running. Height, weight and abdominal circumference are not testable.

“The categories will also be in five-year increments, instead of 10,” Ducharme added. “The fact that requirements change more frequently over the course of a member’s career is another minor tweak that can make a positive difference.

Staff Sgt. Lindsey Knight, with the 157th Force Support Squadron, said all new information for members can be found on the 157th Air Refueling Wing’s SharePoint page under the Wing’s Program tab. She suggested Airmen familiarize themselves with the new exercise choices before their next evaluation.

“I would recommend Airmen try out all new options before taking the PT test,” she said. “It will help them find the components that work best for them.”

Rojek agreed and added that the integration will be a learning process for everyone.

“Practice,” he said. “The exercises are not as easy as they seem and they take a lot longer to do. It won’t be an easy conversion for anyone, especially with a new test and a new database.

Although the new changes bring challenges, Ducharme said that ultimately the additions give Airmen the power to choose.

“There are so many different types of fitness and ways to get in shape,” he said. “Now Airmen will have the opportunity to choose different things that they can do well and prefer to do, to show that they are fit to be part of the Air Force.”

What are the health benefits of bodybuilding?

Running and strength training helped me get shredded in 5 months