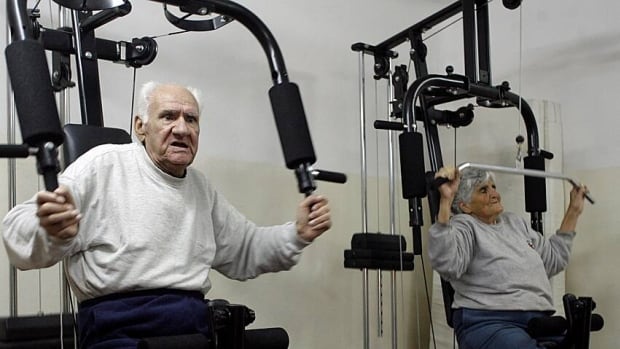 Older people who lifted weights or did other forms of resistance training slowed their decline to full-blown dementia, according to a study including researchers from British Columbia.

A six-month strength-training program targeting women with mild cognitive impairment and complaining of memory problems helped improve their brain functions of attention, problem-solving and decision-making – all needed for independent living .

In the study, 86 women between the ages of 70 and 80 were randomly divided into three groups:

“What our results show is that resistance training can indeed improve both your cognitive performance and your brain function,” said Professor Teresa Liu-Ambrose, who led the study at University of British Columbia.

“What’s critical is that it will improve two processes that are highly sensitive to the effects of aging and neurodegeneration: executive function and associative memory – often impaired in the early stages of Alzheimer’s disease.”

In the case of the BC research, the resistance training program improved associative memory, which refers to the ability of one thought or memory to trigger another, such as “green means go “, as well as conflict resolution.

Almost a third had functional MRI scans at the start and end of the study to look for changes in brain activity.

After six months, compared to those in the balance and tone classes, the strength training group showed “significant” cognitive improvement, the researchers said in this week’s issue of Archives of Internal Medicine.

Those in the weight training group also showed activity changes in specific parts of the cerebral cortex that are associated with cognitive behavior.

Investigators have prepared a YouTube video to guide seniors and fitness instructors working with seniors on how to start doing simple exercises at home or in the gym.

These exercises include squats – a lower body exercise that involves standing with your feet about shoulder-width apart, lowering the body into a squat position and returning to a standing position, then repeating the movement from top to bottom.

Use it or lose it

Researchers advised older people new to exercise to use a trainer to make sure they are doing the exercises with the right form and to grow from there.

The study included a small number of subjects and needs to be repeated in a larger group to confirm the value of resistance training in older adults and test longer-term benefits.

As for why those in the aerobic training group didn’t show the same improvements, Liu-Ambrose speculated that the mental power needed to learn resistance routines might play a role, compared to walking, which tends to come more naturally.

“Strength training itself is a type of exercise that requires a lot of focus,” she said in an interview.

The studies were funded by the Pacific Alzheimer’s Research Foundation and infrastructure support from the Canada Foundation for Innovation.